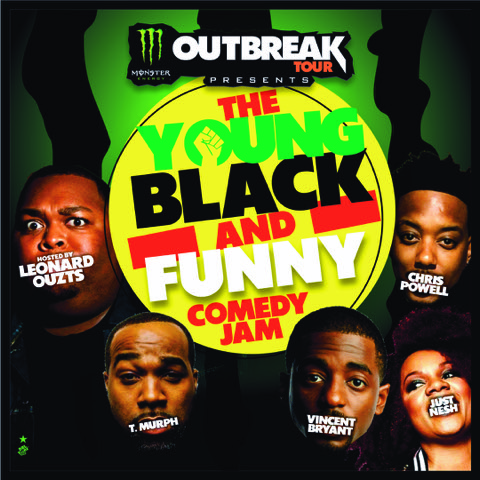 Ouzts, who hails from Chesapeake, VA, has enjoyed success with “Unprotected Sets” his on Epix Comedy Special offers a sarcastic off-the-cuff and versatile style of comedy that gives his audience non-stop entertainment.

Other comedians gracing the stage include Chicago by way of St. Louis’ Vincent Bryant, who made his television debut on Comedy Central “Kevin Hart Presents: Hart Of The City,” Taneshia “Just Nesh” Rice, who was given her own special called “The Next Level” on Comedy Central, performed on Russell Simmons’ HBO standup showcase “All Def Comedy Jam,” “Monique & Friends Comedy Special” and TruTVs “LaffMob Lafftracks,” former Worldstar TV host Detroit’s Chris “CP” Powell, and hailing from Kankakee, IL T Murph, the comic that Entertainment Weeklycalls “scene-stealing and hilarious” and said to have been “the most consistently funny aspect of the show” in the New York Times for his work on Hulu’s Woke.

“I handpicked every comic for this tour, and they are the funniest in the business.  Monster Energy Outbreak Tour believed in my vision, and I am happy to partner with them to bring these live shows to fruition.  COVID has taken a toll on everyone, and we are ready to bring people out to knock the cobwebs off and watch us go to war on the stage,” states Leonard Ouzts.